Ainbo – Spirit of the Amazon premiere

The North Sámi version of Ainbo will premiere in Norway on Friday, May 21st. Duottar studio has dubbed the feature-length animation film Ainbo – Spirit of the Amazon (2021) to North Sámi language. You can watch the trailer in North Sámi here.

The film is produced by Tunche Film and Cool Beans and they have collaborated with the Shipibo people in the Amazon since the film draws inspiration from their culture. The dubbing to Sámi is a collaboration with Another World Entertainment and Star Media.

– We think this is a beautiful film, that resonates with us since it is about a young Indigenous girl in the Amazon fighting against a mining company searching for gold in their home areas. Today there are very few films in Sámi languages especially for children and since our languages are on the UNs list of endangered languages, we think it is important to increase films in our languages also through dubbing, says Anne Lajla Utsi at International Sámi Film Institute. 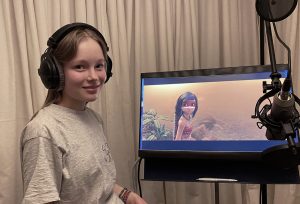 The role of Ainbo is played by Ingá Ánne Márjá Bongo in the North Sámi version.

The North Sámi version of Ainbo will premiere in Norway on May 21st and will be available later at www.sapmifilm.com.

The Norwegian Sámi Parliament has supported the dubbing of the film.