ÁRRAN 360° special guests Outi Pieski, Katja Haarla and Birit Haarla will be a part of the ÁRRAN 360° program with their 360-degree adaptation of their renowned video installation, Guhte gullá / Here to hear.

In their work Guhte gullá / Here to hear, women of different generations listen to the voices of their foremothers through dance, duodji and luohti, traditional Sámi handicrafts and vocal music. The mother-daughter relationship between Outi Pieski and Birit and Katja Haarla chimes aptly with the theme of their first joint artistic collaboration. The space is filled with Tuomo Puranen’s ritual-beating electronic music and Mari Boine’s yoik, which invites us to change and pay attention to the foremothers’ message. 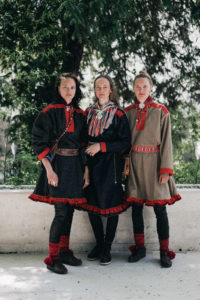 Guhte gullá / Hear to hear is direct by Outi Pieski, Katja ja Birit Haarla. The Multi-channel video installation premiered at the Helsinki Biennial in 2021. Now they have adapted it to a 360-degree format specially made for ÁRRAN 360°.

We will stage the piece in a safe, secluded space filled with Tuomo Puranen’s music, like an underground party cave. Through dance, we bring painful issues to light. Now, if ever, is the time to remind ourselves of how we should listen to our bodies – the body needs freedom to act and express itself.
– Katja Haarli, one of the directors.

Throughout history, from one generation to the next, our spiritual bond with the earth has grown weaker and weaker. But, deep within ourselves, as descendants in the great chain of generations, we all carry traditional lore: knowledge about survival, how to maintain a healthy balance with all living beings, and the spiritual legacy that lives within the earth.
– Outi Pieski, director.

It’s an underground cave party! Young people dance to escape the angst of world destruction, summoning the aid of the forgotten Sámi earth deities Uksáhkká, Juoksáhkká and Sáráhkká. We are losing our connection with the earth and our ancestors who rest beneath the soil. It is time for us to reconnect with the sacredness deep within the earth.

The Árran360 lávvu rings with the voice of our foremothers channeled through Mari Boine’s singing. This space belongs to the Sámi people! Yes, we are taking over some space in Venice!
– Birit Haarla, director and performer.

Guhte gullá / Here to hear will be screened in Venice as part of the ÁRRAN 360° program from the 26th of August to the 10th of September 2022.